The two bravest people on the planet 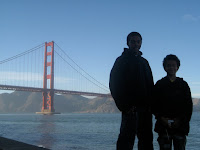 I have decided that the two bravest people on this earth are my sons, Batman and Robin.

Batman is nineteen and Robin is twelve. The hardest thing I have ever done in my life was telling them "Mom has cancer." I've suffered my share of trauma, grief and heartbreak in this life, just like everyone else. This is something I never expected to do in a thousand years. As a mother, your need to protect your children runs so deep, that having to tell them something like this hits you in some primal mother place and it hurts. Bad.

I was so so nervous that morning when Batman came down to leave for school. His Dad and I told him we needed to talk to him about something and I know from the sound of our voices and the look on our faces, he knew right away something really bad was coming. Something really bad. We all sat down.

"Son" I said, "I'm about to ruin your day, let me get right to the point here, I've been diagnosed with breast cancer."

And there it was, what I had been dreading for two weeks, the look of fear, grief, and disbelief on his face. This kid holds everything close to the vest; I should say this man, my 6 foot baby with a size 13 shoe, is one of those brave brave soldiers who feels things very deeply. He always has, ever since he was a little boy in Gymboree overalls, a little hat on his head, chasing the cat to give her a kiss. He stands tall and strong like a mountain, what a presence this man has, but inside of him, there is a deep river of compassion and great great tenderness. He is a warrior with a very gentle soul, like the lion Aslan in Narnia.

We talked awhile, I told him what little I knew, he remained composed, working his hardest to metaphorically clench his fist and man up.

There was a knock at the door. It was Batman's girlfriend, wondering why he hadn't picked her up for class and didn't answer his phone; they commute to college together. Baby Bear walked in and knew something was really really wrong. I was happy she arrived when she did; now we could tell her too, and they could share this grief in a different way then Batman would with his parents.

We talked. We cried. Baby Bear looked shaken. She is part of our family. I adore her. I could tell she was taking it hard. She moved in closer to Batman. I am glad they have each other.

Batman asked "When are you going to tell Robin?"

Robin has always idolized his older brother. For good reason. He has always been a super hero to his little brother. When Robin was a baby and a bit colicky, Batman was the only one who could comfort him, after exhaustive attempts by mother and dad. Batman would carry him around on his chest in a little front facing infant carrier. He would walk the house, talking and bouncing baby, and it was never long till baby settled down and often fell asleep.

Batman has always been the oak that little Robin thrived under.

"We are going to tell Robin after I've met with the oncologist. I'd like to be able to tell him more than just Mom has cancer."

"What did you think I was going to tell you today?"

"I thought you were going to say Grandma died."

I picked up Robin from school. "How bout we drive through McDonald's?" His face lit up.

"How bout we drive down to the park and we can eat over there?"

Robin asks "Wow is it my birthday or sumpthin?"

We pull in to a little waterfront park close to home, and park in a spot facing the water. A tugboat makes it way down the strait, some geese waddle to shore, and a light rain falls.

There is that moment where time stops for me. I am about to change my son's life forever.

"Son, there is something we need to talk about" and already Robin gets a look of panic on his face. These boys know me. I am a cheerful, happy, teasing, joking Mom. I don't often have this look on my face or this crack in my voice. He backed away from me towards the car door and took another bite of his burger.

"Well, I am about to ruin your day and probably your burger, so I'm going to get right to the point and tell you that your Mom has been diagnosed with breast cancer."

Big fat swollen tears filled his eyes, and he took another bite of his burger.

In that moment, I knew what a great job I had done with my son. He was still eating. :)

We talked and he asked lots of questions. We were quiet awhile as the tugboat moved past us and the geese shook their feathered booties and stretched their wings in the soft rain.

Robin looked at me, shook his head and waved his pointer finger at me scoldingly. "You are one tricky lady. I see how you are. Trying to bribe me huh? Mommy has cancer" and he shoved his hand out towards me "Here's a cheeseburger."

We sat a bit more and then he looked at me and reached out to put his arm around my shoulder. "Everything is going to be ok Mom. OMG I thought you were going to say one of the dogs died!"

Only another animal lover could understand this, the way we feel about our animals.

"Are you kidding" I said. "I couldn't handle that. This I can handle."

It was done. Now I can take care of me. My boys know. I was so relieved.

Later that week, Batman asked "When you gonna tell Grandma?"

"You gonna take her to McDonalds?" he asked with a shit eating grin on his face.

With whatever I have accomplished and however I have failed and whatever is still out there for me, there is no greater thing I will ever do in this life than have, and love, and teach these boys.

No greater thing.
Posted by writergirldreams at 2:18:00 PM
Email ThisBlogThis!Share to TwitterShare to FacebookShare to Pinterest

You make me cry but also make me want to name
you Wonder Woman. You will not be beaten by
something so insignificant as cancer. Your
inner strength will power you on. Go, Wonder
Woman, go and conquer.

they are our greatest joy, our greatest comfort, and their pain can break our hearts like nothing in this world. It was Robin who brought you comfort at the worst time in your life. your boys are amazing. as are you.