When Negative is Good for You

Goldenwings and I made a long overdue trip to Fenton's for an ice cream and HomeGoods for a little shopping.  I was hoping to find some Christmas ornaments to add to the collection, but there wasn't much to choose from.  I guess it is too late in the season to expect much of a selection.  The Caramel Almond Crunch was delicious though.

I did find something at HomeGoods I've been wanting for awhile.  It's a Himalayan Salt Crystal lamp.  Ever heard of those?  I found one that is the perfect size for my nightstand.  It looks like a large piece of quartz, and stands about 6 inches tall by 3 inches wide.  It's actually a large piece of salt that has been mounted to a rosewood base, and has a hollowed hole carved into the bottom that a small bulb fits into.

The claims are that when slightly heated, the salt crystal produces negative ions in a room.  What's a negative ion and how is something negative good for you?

A negative ion is an invisible molecule that we inhale, and is most often found in certain natural environments like near the ocean, or in a forest.  When we inhale lots of these, they enter our bloodstream and all kinds of biochemical reactions occur, causing us to feel better and have more energy.

The negative ions also bind with pollutants in the air, causing them to drop to the ground and so they are not inhaled.

I've read all kinds of things about these lamps on the Internet, testimonials from people who say they really work, and other sites saying they don't produce enough negative ions to make a difference.  The sites that sell the lamps say the lamp needs to be on for the effects, and recommend you leave it on 24/7.

I don't know if they work, but the orange glow coming from this big piece of salt crystal sure is pretty to look at for a rock lover like me, and has a calming effect.

If it does work, great!

If not?  The amber glow is soothing and mesmerizing, and makes for a great night light.  I really like it. 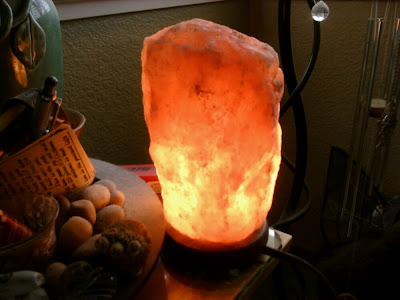 Posted by writergirldreams at 11:24:00 PM
Email ThisBlogThis!Share to TwitterShare to FacebookShare to Pinterest

Ooooo..pretty... Just wanted to thank you for the inspiration--have acquired three bras with no underwire, asked Santa for one of those little trampolines, and shared same with a good friend who's also promised to stop keeping her cell phone in her cleavage. You don't just have a ripple effect...it's a bona fide wave. Huge thanks. Merci!

Thanks to your inspiration have acquired three non-underwire bras, asked Santa for a trampoline, and passed on same to good friend. Ripple effect, girl. Merci!

You got one! Nice! You'll have to let me know if it works...I still have one on my wish list. xoxox. Midge

Eeek! Sorry to double post. I thought the first one didn't process. Urgh.

That's ok Damselfly. At first I thought it was someone else and I thought what a coincidence with a name like Damselfly. Then I read your other comment and realized it was you after all! So happy to hear you are spreading the word. Save Second Base!