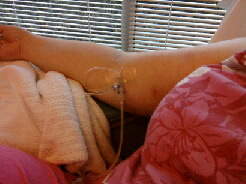 Aww, that's Mopsy, see her there, that big fat bunny?  Flopsy was the cancerous sister, but wherever Flopsy goes Mopsy goes too, so I chose what's called a prophylactic mastectomy on my right side, even though there were no signs of cancer there.

This self portrait was from my last chemo, at the end of five months.  I received my last infusion with a regular IV, because along the way, two ports in my chest failed, and right near the end, the PICC line in my arm failed too.

If you are anxious about getting a mammogram, let me just set you straight.  Early stage breast cancer is so treatable.  In fact, when it's found at Stage 0 or Stage 1, the five year survival rate is 100%.  Early stage breast cancer often requires a lumpectomy, and possibly some hormonal treatment, like Tamoxifen, but not necessarily chemo or radiation.  I am not minimizing how hard it is for anybody to receive a cancer diagnosis and treatment, but I assure you, if it's found early and after a lumpectomy, you can often return to work in a couple of weeks.

I spent almost one year in cancer treatment.

Do the math baby.

Early detection.
Posted by writergirldreams at 3:02:00 PM
Email ThisBlogThis!Share to TwitterShare to FacebookShare to Pinterest