There are moments, after losing a touchstone in your life, that you feel lost, as if even though you are right where you were, nothing seems familiar.


It was not that long ago I was enjoying Thanksgiving weekend, anticipating all of our usual traditions that weekend - turkey sandwiches, choosing a tree, fussing at Husband as he arranged the lights on the tree, and all of the excessive decorating of the house and yard.


I was looking forward to all the rituals of Christmas that are my favorites, like writing Christmas cards, baking peanut butter thumbprint cookies, tissue paper and wrapping paper and gift bags, setting up the nativity (I always kiss Baby Jesus) and sprinkling fake sparkling snow over "Snow World," our Christmas village.


You would think after Cancer Camp, I would not be surprised how your life can turn on a dime, but even when you realize how much is not in your control, there are still some things you can never really anticipate or prepare for, and they knock the wind out of you, and shake you out like the leaves on our now bare tree in the front yard.


On the Saturday night of Thanksgiving weekend, I couldn't sleep, thinking about everything, my year of living dangerously, my year of living gratefully, all the angels and blessings in my life.  That night, which was early Sunday morning, I wrote a poem from my bed, and posted it here, all about "While There Is Time Left."  If there is anything this blog stands for, because there are many things, mostly I have hoped to wake you from your slumber, so you can be present and accounted for in your life, and love love love.


I did not know as I wrote that poem that my Duncle Dody was already gone, found earlier that day on the floor of his San Francisco flat, his reading glasses and yellow rubber clogs nearby, his beloved Dachsies standing guard.  He was already gone.  Although we had just chatted on Thanksgiving Day before I went to work, it was painful to realize that was our last conversation, the last time I would hear him say "I love you Deb" and I would say "I love you Duncle."


One day you're making lists and checking them twice, and the next day, you are claiming the body of somebody you really loved at the morgue.


These last weeks since his death have been difficult, grieving as well as the massive project of closing out his haven, which was filled beyond your imagination with all kinds of things he collected over the years.


It's hard real hard, closing a man's life for him, going through cupboards and drawers and files, handling things that were precious and mundane.  It's hard not to feel like a trespasser when you must go into the secret places.


My Uncle was a passionate collector, some might say a hoarder, and it's made me face my own tendencies to hold on to things, too many things, possessions and psychic baggage and  sometimes people that should have been let go of a long time ago. I hope you never have to clear out the home of some bunny you really loved, and yet it has been very sobering to me, another wake up call in a season of wake up calls that won't seem to end - Simplify, your treasures are your relationships, purge, recycle, donate, and only surround yourself with just a few of the things that you really really love. This is my new mantra - etched onto my heart now:


He was all kinds of things to me, the last story teller of my Mother's childhood, and a huge supporter of me and my blog.  He would often send me emails with not just a comment or two about one of my posts, but a whole letter applauding me for my candor and bravery and transparancy and humor.  He would often remark "Your Mama would be so proud of you, so proud of you.


He was a great great cheerleader to have on my team, and his late night phone calls, frequent emails and hysterical humor about my "tits" will be sorely missed.


As I get closer to my reconstruction surgery, only three weeks away now, it's hard for me to imagine him not being there, as I knew he would be every day, sneaking in chocolates.


There is a little girl, still inside me somewhere, who is running around all crazy and wild and wailing for my Duncle Dody, and I can't find him.


I know I am blessed in this blessed time of year, but it's very hard making Christmas with such a heavy heart.


I pray for lightness.


Jody Berke, dancer, singer, actor, choreographer and costumer has passed away at his home, with his beloved boys, two Dachsie’s, Guido and Vinnie, by his side.

He began his theatrical career at the age of seven, as a singer-dancer on Johnny Olsen’s “Kids and Company”, and also made appearances on “Startime” with Connie Francis, and “Arthur Godfrey and His Friends.”  He often appeared with his sister Nancy, who was later known as a sought after performer in the nightclub circuit of Los Angeles and Las Vegas.


In his late teens, Berke danced his way across the country as a cast member of the national tour of “Coco” with Katherine Hepburn.  He also toured with Carol Channing in the Broadway production of “Hello Dolly” for two and a half years.  Other Broadway cast credits include “Cabaret”, “Lil’ Abner” and “Rosencrantz and Guildenstern Are Dead.”


In between theatre jobs throughout the 1960’s, Berke worked in a variety of administrative jobs in theatre organizations such as the American National Theatre and Academy (ANTA), the International Theatre Institute (ITI) and the Society of Stage Directors & Choreographers (SSDC).  In the 1970’s, Berke turned to theatrical costuming as a side profession and assisted designers in productions of “The Inquest,” “Child’s Play,” “Forty Carats,” and “George M.”


He spent three summers in Paris during the mid-70’s designing costumes for the Burlington Mills TV campaign starring Petula Clark that featured dancers from the Lido and Folies Bergere in huge production numbers.


His film credits as a costumer include “Splash,” “Godfather II,” “Zelig,” “Table for Five,” “Paradise Alley,” “Star Trek VI,” “The Parent Trap,” “Rainmaker,” and “Forrest Gump.”  He also worked as a dresser on “Saturday Night Live,” and years later for several productions of the San Francisco Opera.


Berke was born into a theatrical family.  His father, Joe “Whitey” Berke, was a musician and vocalist with his own trio.  His aunt, Emma Mascolo, was a booking agent with the Independent Booking Office out of New York.  His sister, Sandra Berke Jordan, was a well know film costumer in Hollywood and the former Business Agent for The Motion Picture Costumers’ Local 705.  His sister, Nancy Diane Charles, was a musician/vocalist.


Affectionately known as “The Mayor of Linden Street,” Jody and his beloved Dachsies, Guido and Vinnie, lived in Hayes Valley for twenty years.  He lived his life with flare and style, and was an avid cook and collector of all things epicurean.  He had previously owned and operated a catering company and cooking school aptly named “Eatie Gourmet” and occasionally still catered many lovely parties.


Jody was a passionate and active volunteer for PAWS, SF and his local neighborhood association of Hayes Valley residents.  The “Boys,” as Jody called them, were featured in a PAWS photo shoot, and walked the runway as models in a PAWS fashion show.


He was a fixture in the Hayes, often seen about the neighborhood with the Boys in the basket of his bike, or being pulled in their wagon.  He was loved and talented, funny and generous, and will be greatly missed by all. 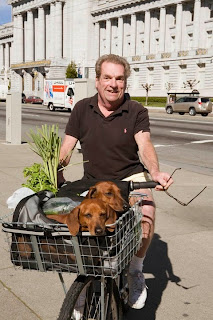 I love you Duncle.  Hit the road Jack. XOXOXO
Posted by writergirldreams at 1:46:00 PM
Email ThisBlogThis!Share to TwitterShare to FacebookShare to Pinterest

Thanks for sharing. What a touching tribute to your Duncle Dody. Sounds like he was a loving man who lived a wonderful & exciting life. I have to read obits @ work so try to avoid them. I was glad you included it in your post. I truly believe "those we love don't go away, they walk beside us every day. Unseen, unheard but always near. Still loved, still missed, but ever dear.". So long as there is someone to remember a person, then they live on in memory.